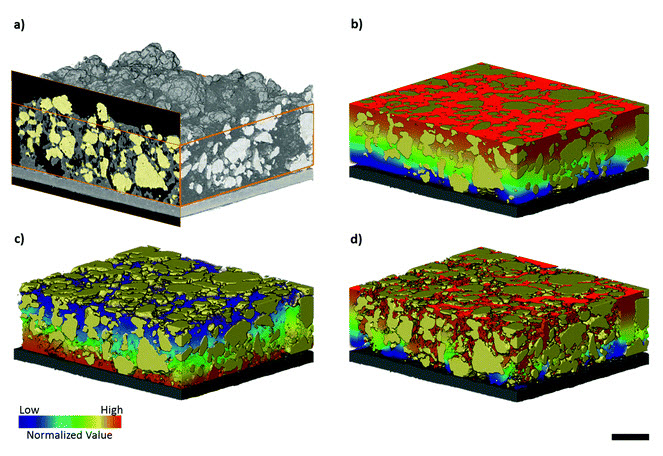 An elemental sulfur electrode was imaged with X-ray micro and nano computed tomography and segmented into its constituent phases. Morphological parameters including phase fractions and pore and particle size distributions were calculated directly from labelled image data, and flux based simulations were performed to determine the effective molecular diffusivity of the pore phase and electrical conductivity of the conductive carbon and binder phase, Deff and σeff, that can be used as an input for Li–S battery modelling. In addition to its crucial role in providing electrical conductivity within the sulfur electrode, the intrinsic porosity of the carbon binder domain was found to significantly influence Li-ion transport within the electrode. Neglecting this intrinsic porosity results in an overestimation of the electrical conductivity within the sulfur electrode, and an underestimation of the tortuosity of the Li-ion conducting phase by ca. 56%. The derivation of effective transport parameters directly from image data may aid in the development of more realistic models of Li–S battery systems by reducing the reliance on empirical correlations, and the uncertainties arising from assumptions made in these correlations.

The first approach, Avizo XLab, uses a finite volume discretization to solve Ohm’s law of electrical conduction or Fick’s law of diffusion, forming a system of linear equations that are directly resolved through matrix inversion. (…) In order to determine the effective diffusivity intrinsic to the carbon binder domain, effective molecular diffusivity simulations were performed in Avizo XLab and TauFactor on the pore phase of the binary nano-CT label field (…), with an estimated volume fraction of ca. 32.4%. Tortuosity factor was determined to be 4.89 in Avizo XLab, in close agreement with 4.92 calculated in TauFactor.